The genesis of Martial Law

The signing of successive agreements between the striking workers and representatives of the authorities of the People's Republic of Poland in Szczecin, Gdańsk, and Jastrzębie led to an enormous eruption of enthusiasm and hope throughout Polish society. Within a few weeks, the spontaneously organized structures of NSZZ "Solidarity" accrued millions of members.

It was commonly believed that this was the beginning of a new chapter in Polish history, an opportunity not only to improve the catastrophic economic sit.uation, but primarily for regaining the subjectivity of society, ensuring in turn respect for human and civil rights, and - finally - for regaining national sovereignty. However, the communist authorities were preparing nearly from the onset to resolve the conflict by force. This option had already been considered in August 1980, but it was thought that the scale of the conflict was too great for a military and militia pacification to be successful. Nevertheless, the staff then assembled in order to prepare the "Lato-80" (Summer 80) operation and continued the planning in the successive weeks. Systematic preparations were commenced in October of 1980, with the representatives of the Ministry of National Defense and the Ministry of Internal Affairs participating in work that was coordinated by the National Defense Committee.

The inclusion of "Solidarity" in the political system of the People's Republic of Poland was another option that was considered. Analyses of this potential solution were conducted by the Polish United Workers' Party and the Security Service. However, the political and force-based variants were all based on one basic premise - that this mass social movement had to be made subordinate to the authorities of the People's Republic of Poland. Faced with the sheer scale of social protest, the rapid development of "Solidarity's" structures, along with the stance of its leaders and members, such a solution was unrealistic, and - in consequence - this approach was abandoned after just a few months. Obviously, activities were continued with the objective of subjecting the Union to at least partial control (the recruitment of agents and other operational activities carried on by civil and military security services).

A real danger of the introduction of martial law in Poland first appeared towards the end of November 1980. It was then that following the arrests of two Mazovian activists of the "Solidarity", Jan Narożniak and Piotr Sapełła, who were accused of distributing secret instructions concerning their combating the opposition, the country was faced with mass strikes. During a meeting of the politburo, which was held on November 26, the possibility of using force was considered. Finally, however, it was agreed that it was too early for a confrontation. Nevertheless, a working staff was appointed comprising representatives of the Party, Armed Forces, Ministry of Internal Affairs, and Supreme Prosecutor's Office, which was tasked with the preparation of a "balance of all forces" for the anticipated confrontation.

The planning operations were completed in March 1981. At that time, the People's Republic of Poland was being visited by a special group of high-ranking KGB  officers and Soviet military personnel; over a period of four weeks, they both provided support to their Polish comrades, and made sure that everything was "in perfect order". The most important document, which was entitled "Central concept regarding the introduction of martial law on the territory of the People's Republic of Poland for reasons of state security", was ready in the third decade of March. It seems, however, that it was signed (and concomitantly antedated) only in the first days of April, at the direct instruction of Moscow.

During this period, Poland was the scene of the "Soyuz '81" military maneuvers, while March 19 was the start of the famous Bydgoszcz crisis (this originated from the assault and battery of three "Solidarity" activists). It still remains unresolved as to whether these events were in any way connected with the completion of the planning preparations for the introduction of martial law, or if they were only a coincidence. Certain premises enable us to assume that there was indeed such a connection, while a confrontation was not decided on due to the enormous and universal mobilization of society around the NSZZ "Solidarity".

Without a doubt, the compromise solution to the Bydgoszcz crisis ended Moscow's trust in Stanisław Kania. From this moment on, a search commenced for his successor. The problem was that, although the PZPR had many representatives of the so-called "healthy forces", none of them - according to the "allies" - was suitable to be the leader of the entire party. Jaruzelski's candidature was not considered for a number of months, for he was considered too weak due to the stance that he took in March 1981.

The situation only changed towards the end of September and the beginning of October 1981, when representatives of the party's "healthy forces" started to suggest to the "allies" that a difference had become apparent in the position of Kania and Jaruzelski, with the latter appearing to opt for a force-based solution. A few days later, Wojciech Jaruzelski became the new 1st Secretary of the Central Committee of the Polish United Workers' Party. Preparations for introducing martial law went into their final phase. The Territorial Operating Groups of the Polish Army appeared around the country, ostensibly to support the local authorities, while in reality gathering intelligence before the final showdown.

As justification of the necessity of introducing martial law, General Jaruzelski - in particular after 1989 - tends to cite the alleged threat of Soviet intervention, with martial law being the "lesser evil". Documents available today clearly show that neither the Warsaw Pact nor the Soviet Union were planning any such intervention. Moscow's strategy was to exert continued pressure on the Polish authorities so that they solved the problem "using their own means and resources". What is more, it was General Jaruzelski himself who turned to the Committee of Defense Ministers of Member States of the Warsaw Pact, who were in session in Moscow at the beginning of December 1981, with a request that they issue a sharp declaration threatening the People's Republic of Poland with an intervention. This request went unfulfilled, and therefore Jaruzelski lost a key element of "evidence" for his assertions. A few days later the General, acting through the agency of Marshal Kulikov, asked Moscow for "military assistance", which was also refused. 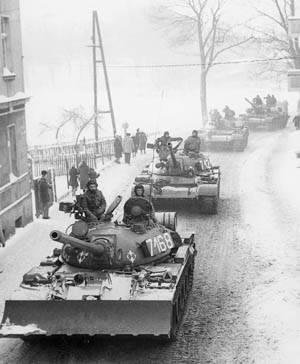