Having recovered from the initial shock, a decision was taken to build clandestine structures of the trade union under the leadership of activists who had survived "Jodła" (the most well known of these were Zbigniew Bujak, Władysław Frasyniuk, Władysław Hardek, Bogdan Lis, and Bogdan Borusewicz), or persons who had hitherto been less prominent. In January 1982, the first (apart from the National Strike Committee, which had existed only a few days) central structure was established. This was the All-Poland Resistance Committee, which was set up by Eugeniusz Szumiejka and Andrzej Konarski. They managed to establish communication between the main emerging regions of the underground trade union – Lower Silesia, Mazovia, Lesser Poland, and Gdańsk-Pomerania.

During this same period, spontaneous forms of opposition to martial law also developed quickly. It became popular to wear resistors pinned to articles of clothing, or light candles in windows as a sign of remembrance of those detained, while in certain cities crosses were arranged out of flowers, etc. In Świdnik in February 1982 a new form of protest was developed – mass "walks" during the daily television news program. The underground printing movement also developed rapidly, in which in 1982 hundreds of papers and numerous books were being published. Other forms of independent cultural activities also appeared. Preparations were continuing for the broadcasting of clandestine radio programs. The first was aired in Warsaw on April 1, 1982. In a short time, Radio "Solidarity" appeared in many other cities and towns. Foreign contacts were established, among others with the Brussels-based Foreign Bureau of NSZZ "Solidarity". The influx of Western aid was of considerable importance for maintaining organized resistance.

In the slowly strengthening underground a discussion was developing regarding the forms and methods of combating the WRON. Two concepts, commonly dubbed the "long march" and the "short circuit", soon gained the greatest popularity. The first of these assumed a long-term struggle, based on the development of a dispersed "underground society", which would have been difficult to pacify for the authorities. The second, in turn, opted for the creation of strong, centralized underground structures that when the right moment came along would be ready to organize a general strike and force the government to accept a compromise, or even to overthrow it.

The All-Poland Resistance Committee became the victim of the victory of the "long march" concept (and of its own errors). In its place, on April 22, 1982 Bujak, Hardek, Frasyniuk, and Lis appointed the Interim Coordination Committee of NSZZ "Solidarity", to which they also invited Szumiejka. This Committee was a moderate body, which attempted to encourage the authorities to reach an agreement and repeal martial law.

Such an approach brought about the further polarization of standpoints amongst oppositionists, which became the most visible in Wrocław. In June 1982, Kornel Morawiecki left the Lower Silesian Regional Strike Committee and created a new, radical organization – "Fighting Solidarity", which called for an open fight with the system. A signal that part of society also expected more determined forms of resistance than those hitherto employed became what were the spontaneous manifestations that took place in many cities on May 1 and 3, 1982.

Meanwhile, the TKK addressed an appeal for dialog to the authorities; this was known as "5 times yes". Its decisive rejection by the Party leadership led to the issuance of another declaration, this one dubbed "5 times no", with society being called upon to hold mass demonstrations on the second anniversary of the signature of the August Agreements.

On August 31, 1982, manifestations were held in 66 cities and towns around the country, with tens of thousands of participants. People built barricades and fought with the ZOMO and military patrols for hours. A tragedy occurred in Lubin – three people were killed following the use of firearms. Elsewhere, there were 5 more fatalities. On the one hand, these demonstrations displayed a considerable potential for resistance, while on the other hand, it was clear that this was insufficient to persuade the authorities to make any concessions.

A specific feeling of strength induced the authorities to finally resolve the further existence of NSZZ "Solidarity". On December 13, the trade union, although suspended, formally continued to exist. During the first months of martial law the authorities were even considering the creation of a "socialist Solidarity"; in time, however, this concept was abandoned in favor of waiting for an opportune moment for eliminating the trade union. This occurred on October 8, when Parliament adopted a new act on the trade unions and at the same time dissolved all existing trade union structures - first and foremost NSZZ "Solidarity". This was met by spontaneous protests - strikes and street demonstrations. The TKK, weakened by Frasyniuk's arrest (October 5), was unable to react with the required speed, and therefore the protests were quickly pacified. Only a few days later the TKK called for a general strike on the second anniversary of the registration of NSZZ "Solidarity" –November 10, 1982. The extended period of time allowed the authorities to prepare; using both skillful propaganda and repressions, they managed to prevent a wider scale of protest. The general strike ended in failure - work was interrupted only at a few plants, with demonstrations taking place in only a handful of cities.

Although following the abolishment of martial law the opposition activities gradually weakened, "Solidarity" endured underground until 1989. Around it sprung up tens of various clandestine youth groups, political parties, social movements, etc., both large and small. 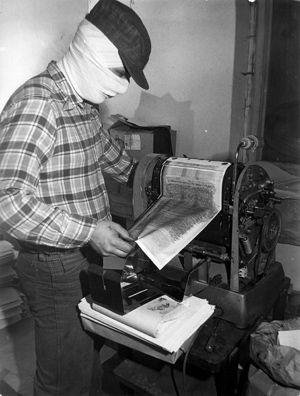