Ordained in 1972, worked at various parishes in and around Warsaw, the chaplain of "Solidarity". During martial law, he was at the Saint Stanisław Kostki church in Warsaw, where he held masses for the Homeland, in turn gathering crowds of faithful. Frequently persecuted by the authorities. When returning from Bydgoszcz on October 19, 1984, he was kidnapped by officers of the Ministry of Internal Affairs. Brutally beaten and murdered. On October 30, 1984, his body was fished out of a water reservoir on the Wisła near Włocławek. The immediate perpetrators of the crime, Grzegorz Piotrowski, Leszek Pękala, and Waldemar Chmielewski, were sentenced to terms of imprisonment ranging from 14 to 25 years, which later reduced based on amnesty. At present, all of them are free. Although a number of attempts were made to try their superiors, they have never been punished. 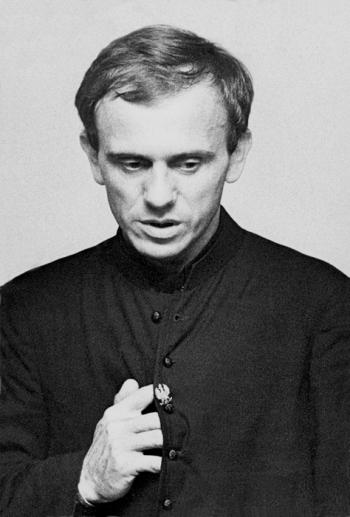