Czechoslovakia in late 1980s was still overshadowed by the events of 1968. Great expectations of the Prague Spring were crushed by tanks of the Warsaw Pact. Initial common resistance broke down. The politics of “normalisation”, i.e. reinstituting the communist party’s control over all spheres of life, was growing increasingly successful.

It meant mass purges and repression, as a result of which tens of thousands of people left the country. At the beginning of 1970s, the authorities offered the society a peculiar agreement: in exchange for relatively high living standard, abandon dreams about freedom. A relatively small group of oppositionists was attempting to break through the atmosphere of apathy and discouragement. However, the declaration of Charter 77 (Charta 77) announced in January 1977 was signed only by 242 people. In total, 1898 people signed it before the communist system collapsed. The society also remained indifferent towards increasing repression at the break of 1970s and 1980s. At that time many oppositionists were imprisoned and others illegally forced out of the country.

Events in Poland and the establishment of the “Solidarity” (“Solidarność”) were met with great enthusiasm by Charter 77 and VONS (Výbor na obranu nespravedlivě stíhaných, Committee for the Defense of the Unjustly Persecuted) activists. It was, inter alia, the result of close contacts between oppositionists from both countries. They managed to meet in 1978 on a mountain trail running along the border. These sentiments were not, however, shared by the majority of Czechs and Slovaks. Only a few people protested against the introduction of martial law in Poland.
Opposition activities were revived only in 1988. Many new groups were established at that time, including: Czech Children (České děti), Democratic Initiative (Demokratická iniciativa), Czechoslovak Helsinki Committee (Československý helsinský výbor), Civic Freedom Movement (Hnutí za obcanskou svobodu), Club for Socialistic Reconstruction “Revival” (Klub za socialistickou prestavbu “Obroda”), Independent Peace Society – Initiative for the Demilitarisation of the Society (Nezávislé mírové sdružení – iniciativa za demilitarizaci spolecnosti), John Lennon’s Peace Club (Mírový klub Johna Lennona). They grouped people with different backgrounds and were unified by the will to break the apathy and to stimulate the society. They were encouraged by optimistic signals from Poland and Hungary.

The majority of the initiatives were founded and operated in the Czech part of the country. In Slovakia the opposition was much weaker; however the underground Catholic Church organisation was very strong and active. Its activists summoned the people of Bratislava to the first silent demonstration for religious freedoms. On 25 March, 1988 a few thousand people with lit candles gathered in the city centre to pray.
Following demonstrations, this time in Prague, took place on 21 August to mark the 20th anniversary of Warsaw Pact military invasion to Czechoslovakia, and on 28 October on the day of the pre-war Czechoslovak holiday. All the demonstrations were brutally dispersed, and hundreds of people were detained.

January 1989 marked the 20th anniversary of self-immolation of Jan Palach, who protested against crushing of the Prague Spring and against the increasing apathy of the society. Thousands of Prague inhabitants, called upon by the opposition, went out to the streets to commemorate his death. Demonstrations lasted few days and came to be known as “Palach’s Week” (15–21 January). Demonstration organisers were sentenced to a few months’ imprisonment. As a reaction to this, a few hundred people of the cultural community signed an open protest.
There was, however, no breakthrough in public sentiment. On one hand, the petition “A Few Sentences” prepared by Charter 77 was signed by 40,000 within a few months, but on the other, demonstrations on 21 August and 28 October, 1989 failed to achieve more significance than a year before. It seemed that in spite of changes that were taking place in Poland and Hungary, as well as the onset of the peaceful revolution in the German Democratic Republic, the communist system in Czechoslovakia remained stable.

At the beginning of November 1989 activists of the Polish-Czechoslovak Solidarity (Solidarność Polsko-Czechosłowacka), a movement founded in 1981, organised in Wrocław the Czechoslovak Independent Culture Festival. Thousands of young Czechs were given an opportunity to meet with emigration artists, whose work was prohibited in their country. But first of all, they could taste the freedom that their parents discovered in 1968. Václav Havel stated many years later that the festival was “an overture to the Velvet Revolution”.

The Revolution started on 17 November, 1989 in Prague with a legally organised ceremony commemorating the events of November 1939 (students’ protest against German occupation which resulted in the closing down of the university and the execution of the protest leaders). Quite unexpectedly, tens of thousands of people turned up at the ceremony. The gathering evolved into an anti-communist demonstration and was brutally dispersed. Few hundred people were beaten up and there were rumours about fatalities. Hundreds of young people were arrested.
On the following day students announced a seven-day strike. They demanded punishment for those responsible for the brutal pacification, the stepping down of the authorities, and negotiations between the authorities and society. They also called upon the society to undertake a general strike. The protest was gradually spreading to other cities. Another demonstration took place in Prague on 19 November. The Students’ Coordination Committee was established, as well as the main organisation of the “Velvet Revolution” oppositionists – the Civic Forum (Občanské fórum) with Václav Havel as its leader. On the following day the Slovak counterpart of the Civic Forum, the Public Against Violence (Verejnosť proti násiliu), was founded. Not only did these two organisations play a leading role in the changes of the autumn of 1989, but also became leading political forces in both parts of Czechoslovakia after the fall of the communist system.

On 20 November there were already 200,000 protesters on the streets of Prague, with another 40,000 in Brno. Smaller gatherings took place in Bratislava and Ostrava. On the following day, the communist Prime Minister Ladislav Adamec met with the Civic Forum representatives. He stated, however, that neither the change of the president (it was still Gustáv Husák), nor the change of the political system could be a subject of the negotiations. Under such circumstances more demonstrations followed. The opposition supported the students’ appeal for a two-hour general strike on 27 November, 1989. Meanwhile, the students’ strike was spreading, and the revolt reached as far as the main tool of state propaganda – the television. A demonstration of power – putting the army into combat-readiness and a televised speech of the minister of defence – came too late to prevent the changes.

On 24 November a plenary meeting of the Central Committee of the Communist Party of Czechoslovakia was convened. All of the Party leaders stepped down, including its Secretary General, Miloš Jakeš. Readiness to introduce numerous political, social and economic reforms was also announced.

Delegations from all over Czechoslovakia came to Prague for the Civic Forum’s demonstration on 25 November. It is estimated that as many as 800,000 people gathered in the city centre. The rally was for the first time broadcast live by television. Protesters were addressed by, inter alia, the leader of the Prague Spring Alexander Dubček, and Václav Havel. It was concluded that changes in the Communist Party were insufficient, and further protests were encouraged. In the evening the new Secretary General of the Communist Party Karel Urbánek appealed to the society to build “socialism without errors” in his televised speech. Prime Minister Ladislav Adamec announced that political prisoners would be released and that talks would be held with the Civic Forum. Also, late in the evening for the first time television broadcast a statement from Václav Havel.
On Sunday, 26 November, negotiations took place between delegations of the government and the Civic Forum. Opposition representatives repeated their demands. It was agreed that talks would be resumed after the general strike. Prime Minister Ladislav Adamec was invited to the next demonstration. When he made a speech and attempted to allude to his concerns about the strike, half a million people started chanting “Step down, step down!”. He also listened to the jingling of keys marking the last days for communists, the symbol of the November demonstrations.
On 27 November, at high noon, in spite of misinformation operations conducted until the very last moment by StB (State Security, Státní bezpečnost) agents, the general strike started. It was held under the slogans: “Down with one party rule” and “Free elections”. The whole country stopped. Millions of people gathered at rallies and demonstrations. With the feeling of enormous power Václav Havel made a number of new demands during his talks with the government on 28 November, including resignation of the government and changes in the constitution. Since the authorities would not agree to some of them (in particular resignation of the president and the prime minister), students extended their strike until 3 December. The centre of gravity of the events, however, moved away from the streets, universities and factories into politicians’ offices where details of reforms were being elaborated.

On 29 November, the Federal Assembly removed provisions from the constitution guaranteeing the leadership role to the Communist Party and established a commission to investigate the events of 17 November, 1989. On 3 December Adamec’s cabinet underwent a reconstruction; however the opposition was still not satisfied. One week later, facing the threat of another general strike president Gustáv Husák appointed a new coalition government which included opposition representatives. The head of the cabinet was the communist Marián Čalfa (in January he left the Communist Party). Immediately after appointing the government, Gustáv Husák resigned his position. Thus, the Communist Party finally lost control over the events. On 29 December, the Party-designated members of the Federal Parliament obediently appointed Václav Havel, until recently a political prisoner, to be the president of Czechoslovakia.

On 8–9 June, 1990, free elections took place. The winners were the Civic Forum (in the Czech part of the country), and Public Against Violence (in Slovakia). Before this happened, the state emblem and name of the country had been changed, and numerous reforms in all spheres of public life had been introduced. However, federalisation of the state which was enacted in April 1990 failed to prevent it from breaking down on 1 January 1993. 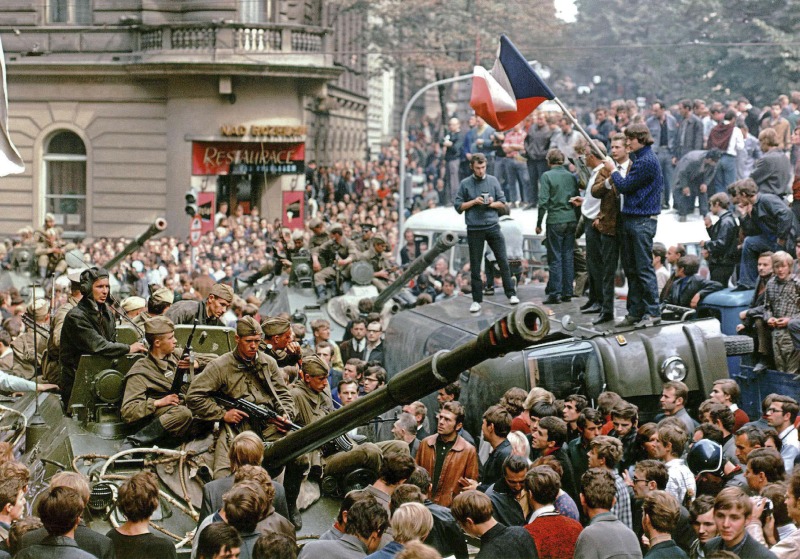 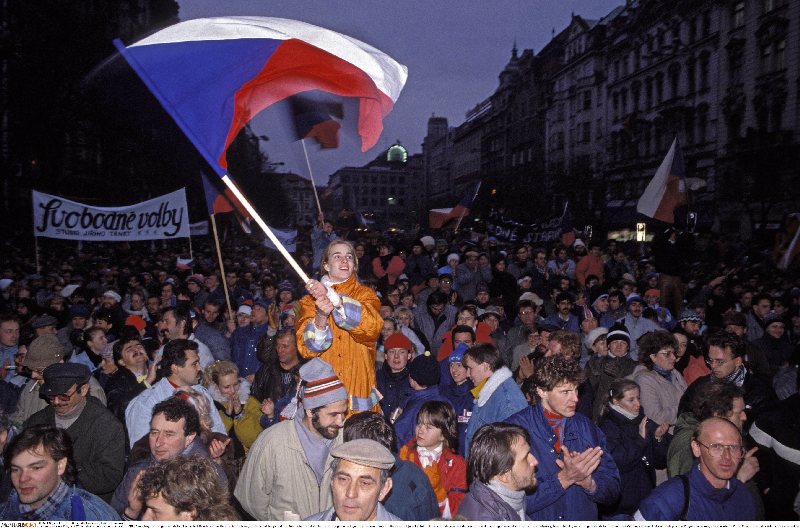 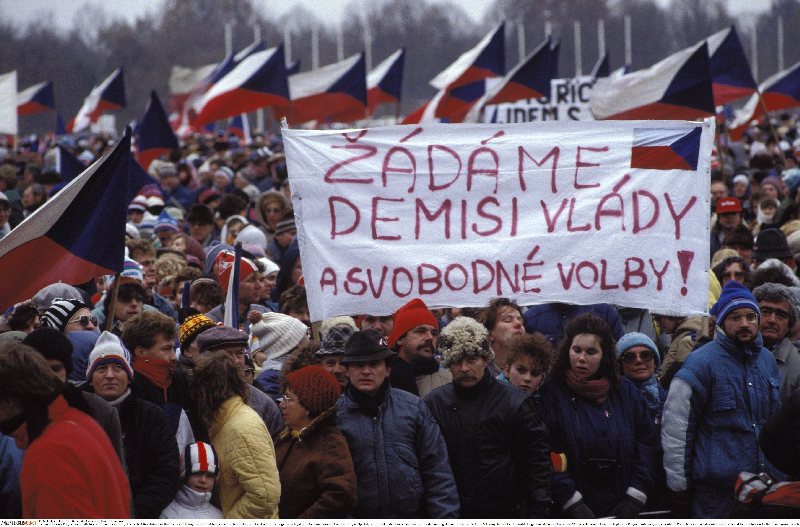 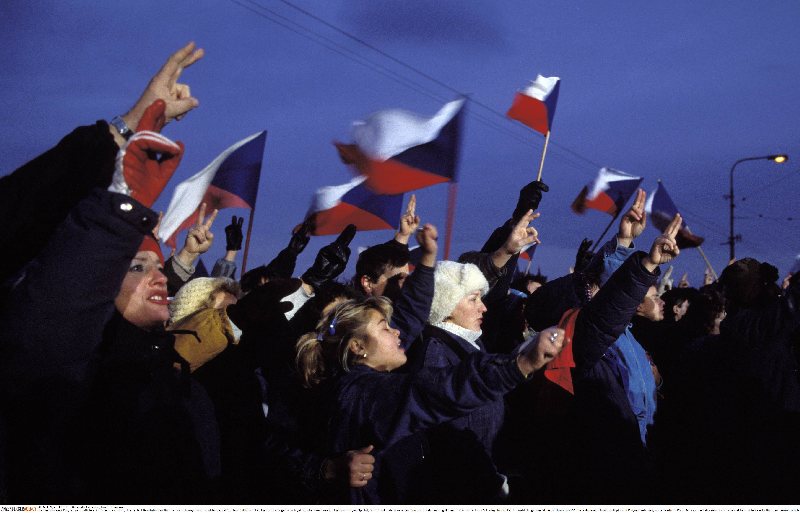 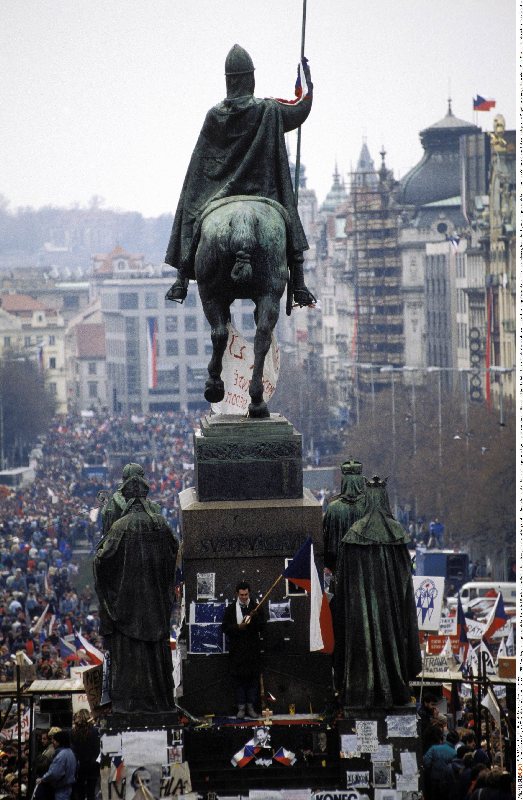 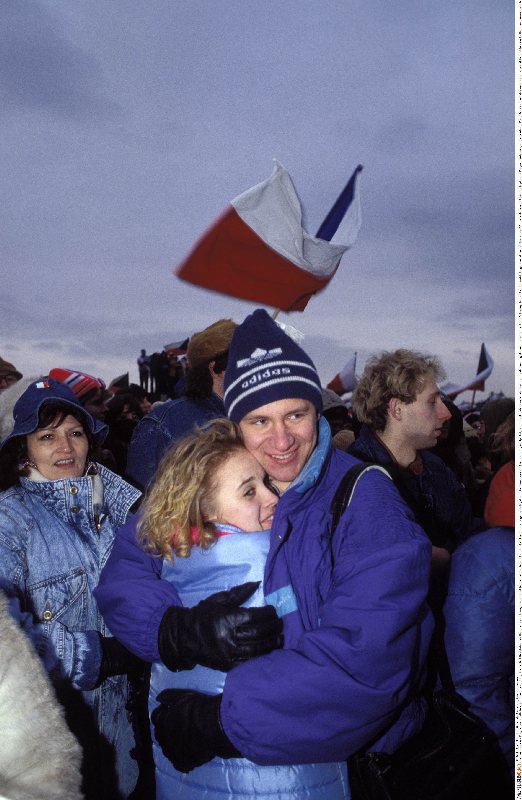 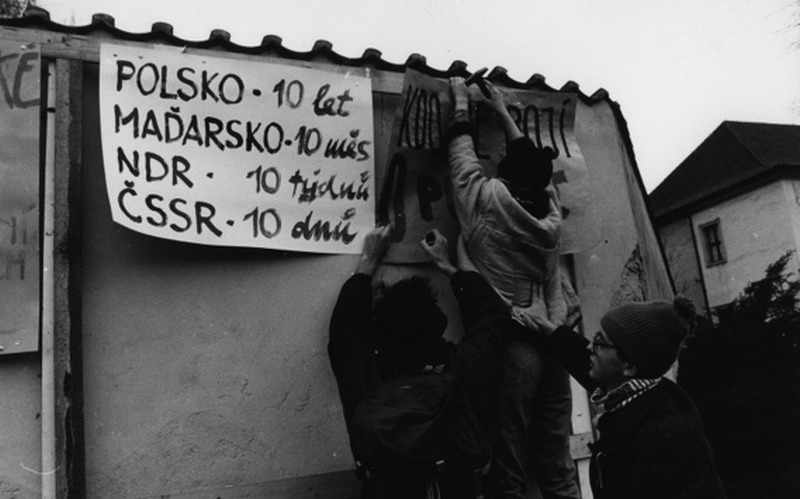