Since the construction of the Berlin Wall in 1961, the German Democratic Republic (GDR) was one of the most stable Eastern European dictatorships. German Communists owed the stability primarily to the omnipotent political police, the infamous Stasi (an acronym of Ministerium für Staatssicherheit, Ministry for State Security).

It had the largest (in comparison with the country’s population) number of officers and secret agents of all Eastern European countries. Not only did the Stasi guarantee stability, but also a considerable income. The money was coming from “export” of political prisoners ransomed by the Federal Republic of Germany (FRD). The head of state from 1971 was the leader of Socialist Unity Party of Germany (Sozialistische Einheitspartei Deutschlands, SED), Erich Honecker. Single protests, like the self-immolation of Pastor Oskar Brüsewitz in August 1976, or riots in Berlin in October 1977 were but isolated incidents. The only slightly broader protest action was organised in 1976 when the famous bard Wolf Biermann was refused the right to return to the country. Average citizens of GDR were expressing their attitude towards the communist reality mainly through continued attempts to escape to the West.

At the beginning of the 1980s in the GDR an independent peace and ecological movement started to take shape. It found support in certain Evangelical church organisations. Gradually, independent, uncensored press started to come out. In December 1985 the Initiative for Peace and Human Rights (Initiative für Frieden und Menschenrechte) was founded. It became the main opposition force. There were great expectations about the policies of Mikhail Gorbachev. As a result, GDR authorities prohibited publication of certain Soviet magazines.
The first attempt to organise an opposition demonstration was made on 17 January, 1988 in Berlin. Oppositionists wanted to use official celebrations to present their demands. The majority were arrested before they unfurled their banners. Some of the protesters were allowed out of the country, others were released from prison. Repression could not, however, stop the development of the opposition movement or the increasing wave of flight from the country.

In January and March of 1989 new demonstrations were organised, this time in Leipzig. This city was soon to become one of the centres of protest against SED dictatorship. At the same time, oppositionists addressed the government of Czechoslovakia with two letters. Authors demanded the release from prison of the participants of demonstrations commemorating the death of Jan Palach. The letters were signed by representatives of the majority of East German opposition groups.

Communal elections of 7 May, 1989 became the turning point of the struggle against the regime. About 100,000 people answered the opposition’s appeal and publicly declared that they would boycott the elections. Attempts were also made to perform independent attendance estimates. This did not stop the authorities from announcing that, as in the previous years, 99 per cent of citizens cast their vote and supported the only list. Upon publication of the data, a number of official protests were made, some of which were based on partial results from individual election commissions.
Another wave of protests followed after the massacre of students in Tiananmen Square by Communist authorities of China on 4 June, 1989. In many GDR cities leaflets and graffiti appeared. Demonstrations were organised in Leipzig and Berlin.

At the same time, on 4 June in partially free elections, Poles unanimously supported the anti-Communist movement. As a result of changes in Hungary, controls on the border with Austria were removed at the end of June. This was a clear signal for the people in GDR that Poland and Hungary (relatively easily accessible to them) could serve as a staging post on the road to the West. From July onwards hundreds and then thousands of GDR citizens tried to reach Austria through Hungary. With time, they started to force their way into the Federal Republic of Germany’s embassies in Budapest, Prague and Warsaw seeking political asylum. A mass phenomenon like this could no longer be concealed. The situation worsened at the beginning of October when permission was given to transport refugees in special trains through the territory of GDR. In Dresden thousands of people attempted to board the trains and riots ensued.

Existing opposition groups were becoming more active. New groups like the Democratic Awakening (Demokratischer Aufbruch) or the Democracy Now (Demokratie Jetzt) were set up. New Forum (Neues Forum) came to be the most important opposition force. It published the declaration “Initiative ‘89” (“Aufbruch ‘89”), signed by thousands of GDR citizens. In September, crowds gathering at Masses for peace in St. Nicholas church in Leipzig were growing larger and larger. Every week more and more people participated, not only in services, but also in ensuing demonstrations.
7 October, 1989 was the 40th anniversary of the establishment of the German Democratic Republic. Meanwhile, on 2 October in Leipzig, as many as 20,000 people took part in a demonstration. They shouted slogans supporting Gorbachev and demanded the New Forum to be officially registered. In spite of gigantic police force mobilisation, demonstrations during anniversary ceremonies could not be prevented. Various protests occurred in 18 cities and 3456 people were detained. In Berlin the crowd chanted “Gorbi, Gorbi”, hoping that the Soviet leader would persuade Honecker to launch reforms.

From that moment on, practically every day demonstrations were being organised. The culminating point was the demonstration of 16 October in Leipzig, with over 120,000 participants. The “Peaceful Revolution” started. On 17 October, the Political Bureau of the Central Committee of SED decided to dismiss Honecker and his closest backers. The decision was formally confirmed next day by a vote during the Central Committee meeting. An ambitious (and much younger) activist Egon Krenz became the new First Secretary of the Party. On 27 October, he also took the position of Chairman of the Council of State. Amnesty was announced.

Personnel changes were not, however, accompanied by a specific programme of reforms, therefore demonstrations were continued. Hundreds of thousands of people were going out in the streets in dozens of German towns. The most popular slogans included: “We are the people”, “Free elections”, “Democracy now or never”, “Down with the Stasi”. At the end of October the authorities decided to start unofficial talks with the opposition. The evidence of the opposition’s power was 700,000 protesters at the demonstration in Berlin on 4 November, 1989. On 8 November the New Forum was legalised. On the same day, the Political Bureau of the Central Committee of SED resigned. A change of the government was also announced. Hans Modrow was to become the new Prime Minister.

On 9 November, a draft of a regulation permitting free emigration to the FRG was adopted. The information about this legal act announced during a press conference was imprecise, but quickly propagated by the West German television. Within an hour, thousands of Berlin citizens started to make their way towards the hated wall dividing their city. Under pressure from the crowd, a decision was made to open the border immediately. Berliners commenced spontaneous destruction of the wall. Within a few days about 4 million people crossed the border from East to West Germany. Under such circumstances, any reforms or changes of government were insufficient. On 22 November talks at the “round table” were announced. New leader of SED expressed readiness to remove the provision guaranteeing “the leadership role” to the Party from the constitution. In the meantime, Honecker was expelled from SED.

Although GDR leaders were decidedly declining Helmut Kohl’s (chancellor of the FRG) proposals to commence talks about reunification of both countries, this postulate was becoming more and more popular among the society. At the beginning of December, public opinion in the GDR was electrified by the news that AfNS (an acronym of Amt für Nationale Sicherheit, Office for National Security), successor of Stasi, was conducting mass destruction of documents concerning the criminal activities of the secret police. The reaction was immediate – demonstrators took over and occupied buildings of the up to recently omnipotent secret service. SED’s “ally parties”, which had had no importance, forsook their allegiance to the ruling party. The SED convention, which commenced on 8 December, elected new party leadership. The economy was about to collapse.
In such an atmosphere, the “round table” talks started on 7 December, 1989. There was an equal number of opposition and governmental participants, as well as Evangelical Church observers. Several working groups were established. Their objective was to work out an agreement on individual issues. More and more participants representing new organisations were invited to take part in the following meetings. Simultaneously, “round table” talks were being organised in the capital cities of all districts of the GDR.
Meanwhile, social tension did not wane. More and more, the society clearly articulated their demand to reunify Germany. The postulate was rejected both by the Communist Party and by the majority of the opposition. As a result of rumours that, even though the Stasi (AfNS) had been formally dissolved it still continued its activity, on 15 January, 1990 protesters took over the headquarters of the former Ministry of State Security in Berlin.
Gradually, participants of the “round table” talks were reaching an agreement on crucial issues such as: the restructuring of the socio-political system of the GDR, introduction of democratic mechanisms, pluralism in the media, etc. The most important decision concerned the organisation of free parliamentary elections in a short time. In spite of the election campaign, “round table” talks continued. They were finished on 12 March. The leading role in the election campaign was played by West German politicians – Helmut Kohl supporting East German CDU (Demokratische Union Deutschlands, Christian Democratic Union of Germany) and Willy Brandt promoting SPD (Sozialdemokratische Partei Deutschlands, Social Democratic Party of Germany).
Elections took place on 18 March 1990. CDU achieved a crushing victory with 48.1 per cent votes (together with its allies). They owed their success to not only the popular Chancellor Kohl, but also, or primarily, to a clear-cut stance on the reunification of Germany. For the majority of East Germans, the reunification was the only path towards prosperous future. SPD won 21.9 per cent of votes and the successor of SED – Party of Democratic Socialism (Partei des Demokratischen Sozialismus) 16.4 per cent. Opposition parties grouped in the Alliance ’90 (Bündnis ‘90) incurred a defeat winning only 2.9 per cent of votes.
The election result marked the beginning of the end of the GDR. Negotiations on condition of reunification started. They had both national and international character. Finally, the reunification of Germany was enacted on 3 October 1990. 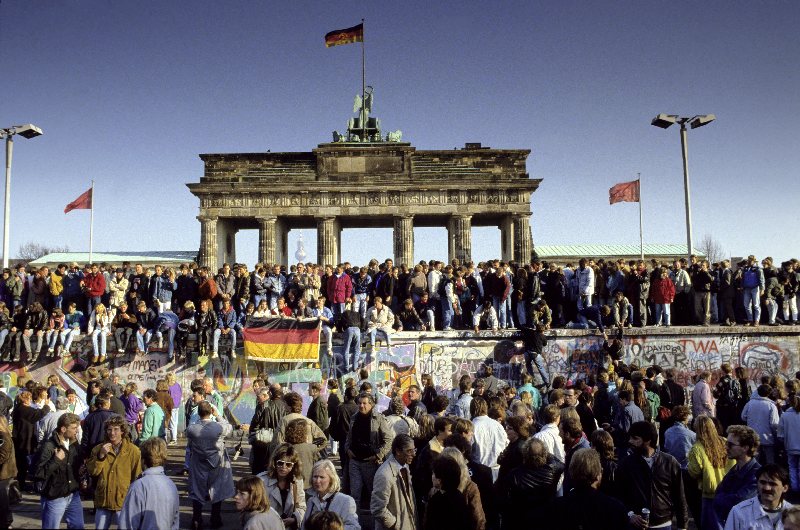 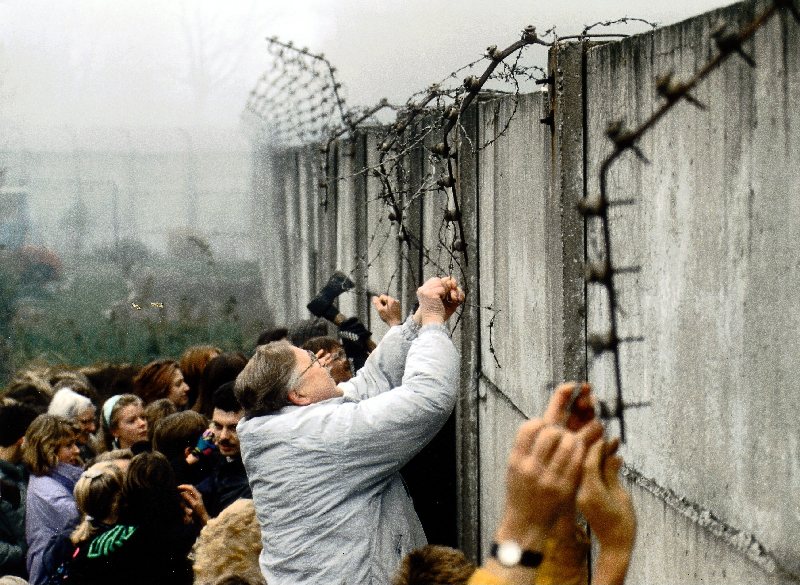 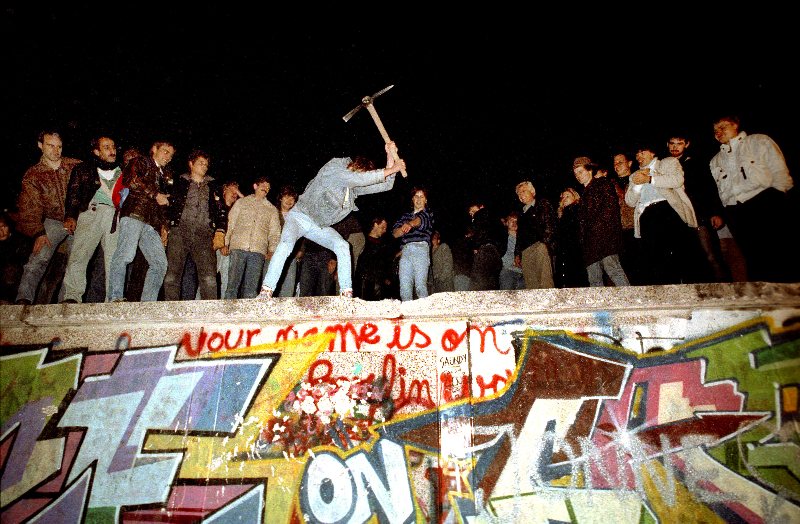 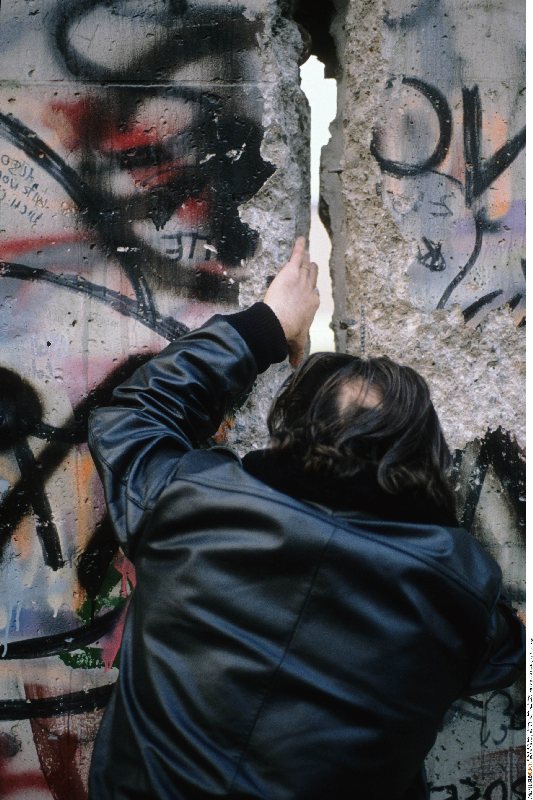 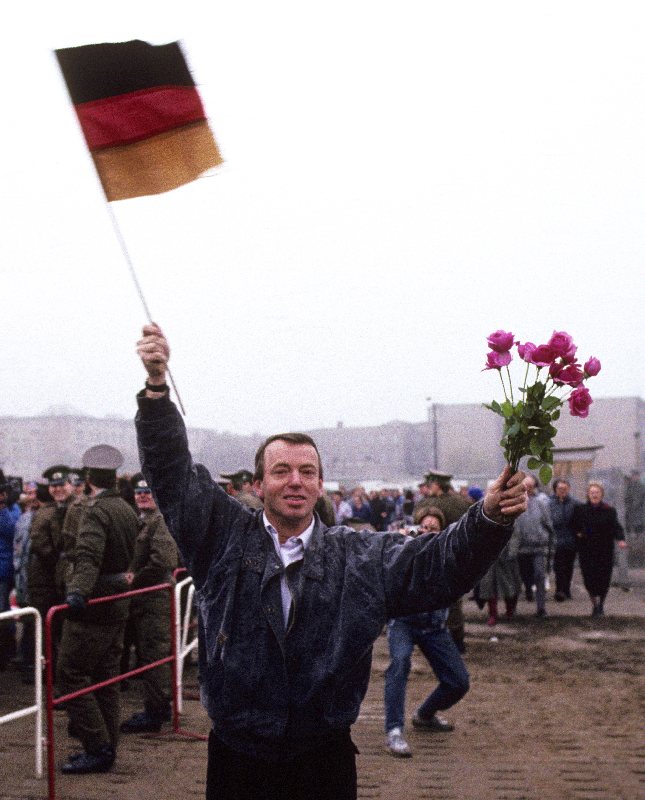 kliknij aby powiększyć zdjęcie
The fall of the Berlin Wall opened the road to the unification of Germany. Berlin, November, 1989 (Chris Niedenthal/FORUM)