Romania in late 1980s was one of the most peculiar Central European dictatorships. By the decision of Nicolae Ceauşescu, who was the leader from 1965, a few districts of Bucharest were destroyed in order to build monumental public edifices (some of them are not finished till today). A similar plight was shared by hundreds of villages, which were destroyed within the “systematisation” programme.

People were displaced to blocs. The following attempts to reconstruct the economy led to its total collapse. The symbols of this were a continuous lack of food and a lack of electricity. The country also plunged into international isolation. Fear was spread by the hateful and omnipotent Secret Police – Securitate (Departamentul Securităţii Statului). The cult of the Party leader was systematically developing.

At that time, not many people remembered the circumstances in which Ceauşescu came to power. In the middle of the sixties, Romania was seen as the most liberal country of the Soviet bloc. Massive repression was not conducted and thousands of people were released from prisons. The liberalisation of culture and science accompanied the improvement of the life level. 21 August, 1968 became a turning point for the dictator’s fate. In the morning on the day of the invasion of the Warsaw Pact army to Czechoslovakia, a major rally was convened in front of the building of the Central Committee of the Romanian Communist Party. During the rally, Ceauşescu delivered a partly improvised speech in which he called to defend the motherland against the expected Soviet invasion. Thousands of people joined the ranks of the Patriotic Guard and they also enrolled themselves in the Party. Ceauşescu gained recognition in the West and even unofficial promises of help in case of aggression.

In the following years, Ceauşescu loosened the ties with Moscow, and he even made some anti-Soviet gestures; however, he did not decide to break with the Eastern bloc. For some time, he tried to get in close contact with China. He was, however, gradually convinced that the best way is to develop one’s own model of dictatorship, which would be based on Communist ideology and nationalist elements. This led to a systematic elimination of real and imaginary enemies and at the end, to the aforesaid catastrophic situation of the country at the end of the eighties.
In 1989, it seemed that the dictator’s power was not threatened. One real opposition group could have been the Party activists dismissed by Ceauşescu. The dictator, however, was worried about the consequences of events in other countries of the bloc. In the middle of August, leadership of the Romanian Communist Party sent a letter to the Parties of other Communist countries which included an appeal not to allow the government in Poland, with an activist from the “Solidarity” (“Solidarność”) as the head of it, to be appointed.

The first unsuccessful attempt of organising the manifestation took place on 14 December, 1989, in Jassy. The real beginning of the events took place the next day in Timisoara. It was a place where tension had been growing for a long time connected with the persecution of Hungarian minorities, whose leader was pastor László Tőkés. On 15 December, in front of his house, the faithful gathered in order to prevent the clergyman from being deported to a provincial parish. On the next day, riots took place and lasted till the early hours. On 17 December, force was used against the demonstrators, and over 60 people were killed. The situation, however, was not controlled – the fights lasted till 18 December and on 19 December, the local plants began to strike. On 20 December the Romanian Democratic Front (Frontul Democrat Roman) was set up in Timisoara.

On the same day, Ceauşescu appeared on television and declared that the initiators of riots in Timisoara were “avengers, revisionists and foreign Secret Services”. The dictatorship was endangered. Despite the following demonstrations in Timisoara, the military commanders refused to send soldiers to fight again. In spite of this, Ceauşescu decided to repeat his triumphant speech from 1968. On 21 December, 1989 tens of thousands of people were gathered in front of the Central Committee of the Romanian Communist Party building. Instead of enthusiasm, the dictator was welcomed by exclamations “Away with Ceauşescu”. Soon in Bucharest, the fighting started and the first victims appeared.
On 22 December, tens of thousands of people took part in demonstrations in the capital. The newly appointed Commander-in-Chief of the army gave an order to return to the barracks. The only escape for the dictator from the Central Committee building, which was surrounded by demonstrators, was by helicopter. Authority was claimed by the National Salvation Front (Frontul al Salvarii Nationale), the leaders of which were former party activists and representatives of the army. The temporary president was Ion Iliescu, a marginal party activist who was pushed aside by Ceauşescu.

The withdrawal of troops from the fighting did not mean the end of the fights. Armed defenders of the regime appeared in the cities. They were called “terrorists” and they shot at demonstrators, killing tens of people. On the afternoon of 22 December, the escaping Ceauşescu was arrested and then, together with his wife Elena, was quickly tried in the Military Tribunal. They were sentenced to death and the execution took place on 25 December, 1989.

During the fighting 1104 Romanians died. Even today, there are many doubts concerning the course of events, the role played by the Soviet Union and concerning the details of the revolution among the authority elites. It is also not clear who was behind the “terrorists” whose activity caused the greatest number of victims.

The revolution was a success, however, this was just the beginning of Romania’s path to democracy. The new regime did not intend to follow all the democratic rules, which was shown during the events of June 1990. President Iliescu called the miners to come to the capital and break up a student protest. There was bloodshed again on the streets of Bucharest. Only in 1996 forces comming from the opposition groups temporarily managed to oust Iliescu and his staff from power. 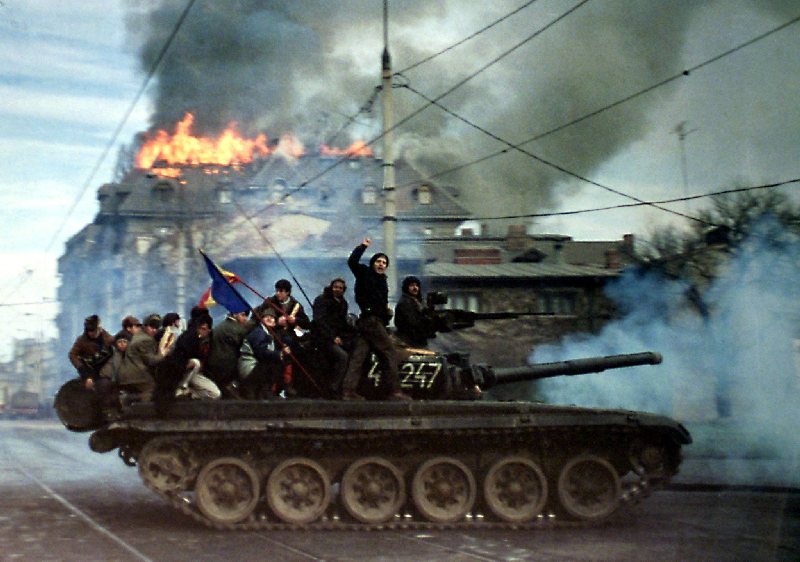 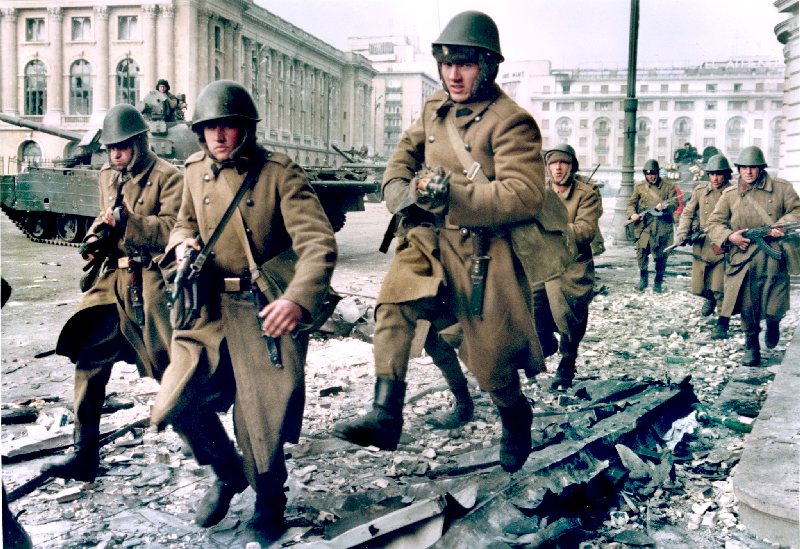 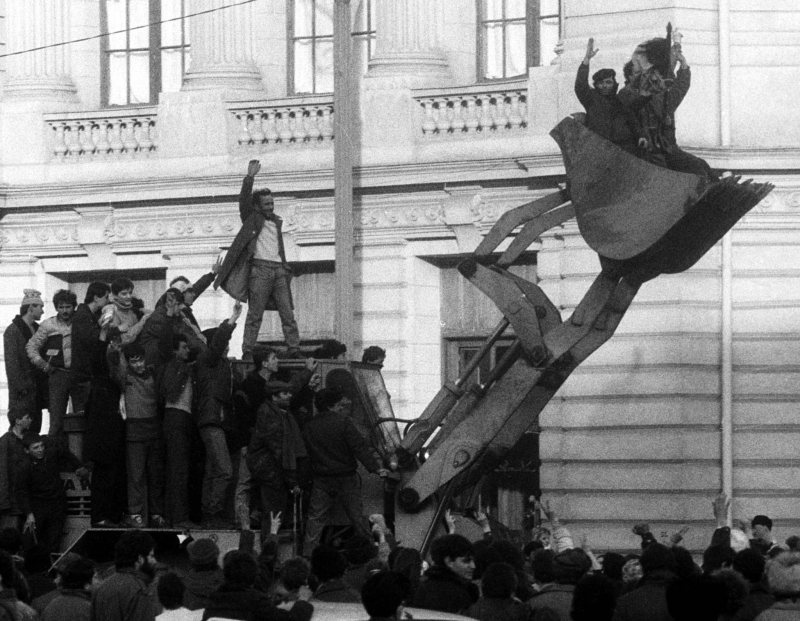 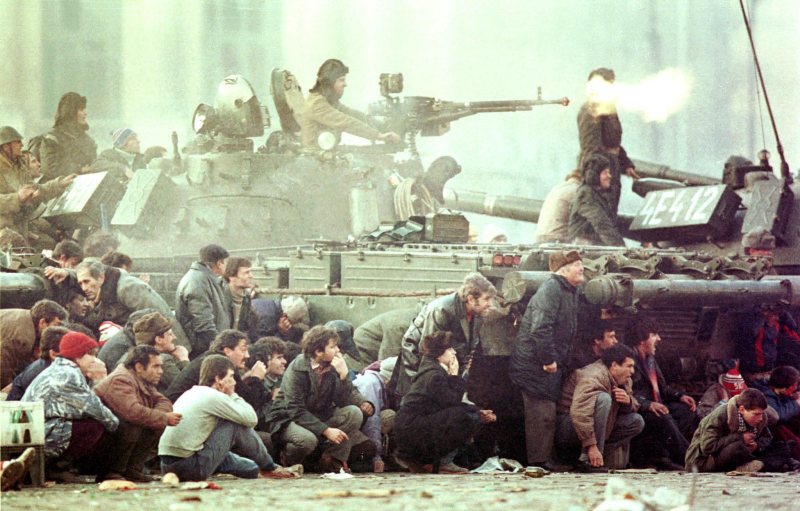